Arrogance , God, and the Election 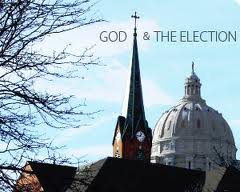 Helamen 5:2
For as their laws and their governments were established by the voice of the people, and they who chose evil were more numerous than they who chose good, therefore they were ripening for destruction, for the laws had become corrupted.~ Book of Mormon


I saw the above posted on Facebook after the announcement of Obama's re-election and when it became apparent Gay Marriage would be approved in four more states.  I have several issues with this quoted scripture.  First, it comes from a 19th century work that has as much chance of being the word of god as Nate Silver the chance gave to Romney to win the election.

Second, It is used to justify an apocalyptic world view.  Some how slightly over 50% of the country is out of step with god and we will suffer his wrath.  It also suggest that the laws that come from this elected government can be ignored.

Third, it is used to justify the "chosen people" mentality Mormons have.  Somehow the 6 million, give or take 40% depending on how you view activity, living in the United States know more about what it is to be moral and righteous than the 300 million other folks who report they believe in god.  No one has suffered more and they will be rewarded.

As for me, I support the President.  I think we are continuing on a trajectory of tolerance, acceptance, and inclusiveness.  We are valuing people and not ideology.  I think women, children, minorities and (if they can put aside their prejudice) white men and women will be better off.  The election was not an movement to evil.  It was banishment of evil.  The kind of evil that hurts people.  That is what America voted down on Nov. 6th.
Posted by Unknown at 3:59 PM